The Board of Trustees of Yellowknife Education District No. 1 (YK1) created the Sacred Feather Indigenous Student Awards in 2022 to honour Indigenous students who model strength and commitment in the pursuit of their personal education paths. The awards are part of YK1's commitment to reconciliation, and are linked to the Board’s strategic priority of celebrating Indigenous culture and language and building strong communities. Awards will be handed out annually to four YK1 students across four age categories.

Sacred Feather Indigenous Student Awards celebrate the unique qualities of students who inspire their peers, teachers, education leaders, and community members while celebrating the ways of their people. Each recipient embraces their own gifts, strengths and potential, while respecting other students to do the same in their own ways.

YK1 was honoured to recognize its first-ever recipients during year-end events over the past week. Recipients were presented with feathers, certificates, and a gift card to the Yellowknife Book Cellar. They will also have their name engraved on a legacy plaque at YK1's District Office. Congratulations to the following students for embracing their cultural identity and promoting the strength, beauty, and value of their community! 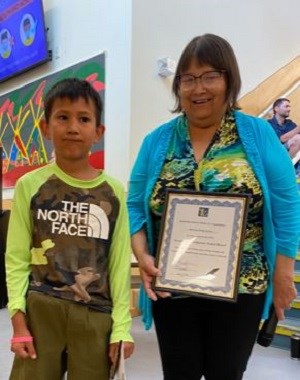 Bez received a Sacred Feather Indigenous Student Award because of how proud he is to be Dene. He is an active participant and enthusiastic learner of the Wiilideh language in his Indigenous Language and Culture class. Bez also demonstrates pride in his cultural identity by drumming with guest drummers for school ceremonies, sharing stories of his visits with family, and connecting his traditional knowledge with learning in class. Congratulations, Bez! 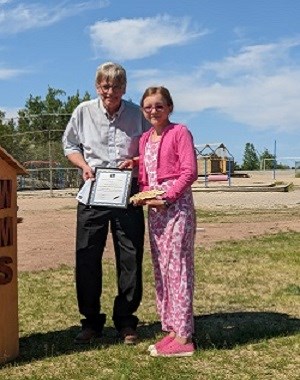 Originally from Inuvik, Mia received a Sacred Feather Indigenous Student Award for embracing her cultural identity and promoting the strength, beauty, and value of her Inuit community. Mia is a leader who is respectful of Elders, staff and peers. She proudly shares her cultural dances, traditional language, and beautiful clothing made by her aunt. She has enthusiastically learned about Dene culture, language, and history while celebrating and sharing her own. She is gifted at making connections between the two such as the differences between dancing and drumming in Inuvik and Yellowknife. Congratulations, Mia! 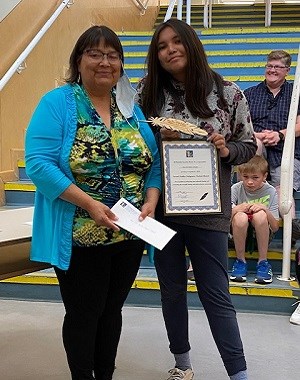 Mya received a Sacred Feather Indigenous Student Award for being a strong advocate for Dene values and traditions. Mya often shares stories of her own time on the land with her family and stories that she has learned from Elders. She is proud of her cultural identity and connects her culture with topics being addressed in the classroom. Taking on a leadership role, especially while on the land, is a strength for Mya. Whether it is using tools, identifying plants and berries, beading moccasins, or demonstrating how to clean fish, she is always involved and encouraging her peers as they learn. She can be found at community events in Yellowknife, Ndilo, and Dettah, and attends on-the-land camps during the summer, too. Congratulations, Mya! 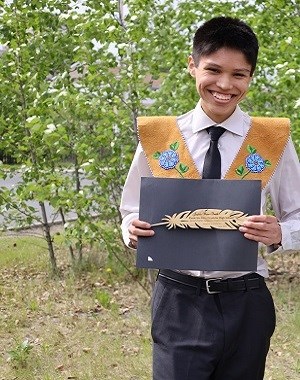 A Grade 12 student at École Sir John Franklin High School, Jaylen received a Sacred Feather Indigenous Student Award for being a strong advocate for Dene values and traditions. With family ties to Behchoko, Jaylen's traditional language is Tlicho. He is proud of his culture and participates in hand games and drum dances anytime there is an opportunity to do so. He has been accepted to the British Columbia Institute of Technology's Finance diploma program for next year. Good luck in your post-secondary program and congratulations, Jaylen!

The Cobb County School District is committed to parent, family and community engagement, and it is our hope that by providing this tool on our website that we are making our information more accessible to families whose first language is not English and thereby enabling better engagement in public education.

Powered by
Back to top